There's only one label that could convince me to wear khaki - Anna Murphy, THE TIMES

"For a colour-lover such as me the news that khaki is having a moment has not been entirely welcome. I am coming round to the idea, but I can’t quite shake off the feeling that a material designed as camouflage still tends to function as such. And, forgive me, I never want to blend in. 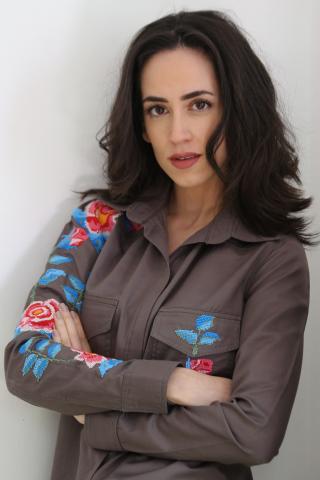 This hand-embroidered shirt, £181, from SEP Jordan, was produced by Palestinian women in the Gaza camp

No danger of that in this hand-embroidered Hana shirt, pictured, from SEP Jordan (£181, four-week delivery time, sepjordan.com). Designed by the Amman-based designer Rasha Odeh, it’s lovely enough to do all the talking, but, should you be up for reading between the lines, there are other reasons to buy it.

SEP Jordan’s pieces are produced by Palestinian women in the Jerash refugee camp in Jordan, otherwise known as the Gaza camp. SEP stands for “social enterprise project”, but the brand’s Italian founder, Roberta Ventura, is keen to point out this is a business, not a charity. “That is what the women told us they wanted,” the former investment banker says. “When we first met them we were greeted with a lot of scepticism. They had done work for NGOs producing so-called heritage products, and the pieces never sold so they never got paid. I wanted them to produce things that women like me would buy and wear. They soon discovered we were different. That the things we made would sell and that we would pay them quickly.”

Palestinian girls are taught to embroider by their mothers and grandmothers, and the traditional heavily ornamented dresses are worn on high days and holidays. “We are preserving their heritage, but we don’t label it in that way,” Ventura says. “And the work has gained a new dimension for these women. One of them told me recently, ‘We don’t know who we are or where we are going, but when we look at the canvas and count the crosses we can forget our problems and just concentrate on creating something beautiful. It is a kind of therapy.’ ”

Sales have doubled each year since the brand launched in 2013 and the number of embroiderers has increased from 20 to 300. The women receive 18 per cent of the price of a garment they have made, and SEP Jordan invests a portion of the profits into improving life in the camp, offering, among other things, classes in English and coding, and providing education and support for women dealing with domestic violence.

Also both khaki and covetable are SEP Jordan’s extravagantly bloom-strewn Tulip shirt, which launches today, and the Flame jacket, a hooded parka with semi-abstract embroidered edging available in three colourways (£160 and £225 respectively, with one-month delivery time). Plus there are some gorgeous embroidered linen shawls, my favourite being the pink and orange on grey Alhambra style (£201, available now).

The LBD — it’s the new LBD
To the Royal Academy for last week’s Summer Exhibition party, always one of the season’s hottest — and highest dress-code pressure — tickets. What conclusions were to be drawn about how the great and the good, the female portion at least, dress to impress these days? On the one hand that anything goes, as long as it’s not black. The LBD was nowhere to be seen, having been superseded by the LFD (in which L stands for little or long and F stands for floral) and the — hang on a minute — LBD, in which B stands not for black but bright, as in yellow, red, pink, green, whichever hot hue takes your fancy.
What else? It’s very much a case of arms maketh the woman these days. Sleeveless and short-sleeved dresses — always dresses — were the name of the game. The biggest wardrobe fail was to not hand your jacket in at the coat check and make manifest your gloriously toned triceps. Full disclosure: that was me. But only because I couldn’t get enough of my Topshop black crop jacket with frill detail (£45, topshop.com).
It was not — for once — because my upper-arm musculature wasn’t up to snuff. Thanks to the new book by fitness trainer-cum-yoga teacher Shona Vertue — she finesses the downward dogs of some bloke called David Beckham — I can give good upper arm with the best of them (The Vertue Method: A Stronger, Fitter, Healthier You — in 28 Days, £15.99, Yellow Kite). Vertue’s beyond-pert buttocks are a particular thing of wonder, but thankfully it isn’t yet a prerequisite to showcase similar at parties, or at least not at the ones I go to. 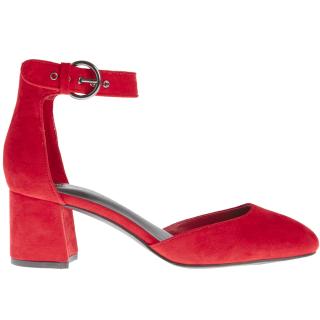 Marks & Spencer’s red suede-effect midi-heels are chic-looking, and £29.50 to boot
You don’t want to be in Theresa’s shoes
My eschewal of jacket removal was not the most egregious sartorial #mybad this week. That came at a friend’s birthday dinner on Saturday night, for which I decided unthinkingly to wear my favourite leopard-print flats. The horror on the part of my fellow guests came from all sides of the political spectrum. “You are wearing Theresa May shoes,” exclaimed mortified lefties and Tories alike. My choice of footwear was getting me noticed in all the wrong ways.
In contrast a fellow guest’s red suede-effect Marks & Spencer numbers, pictured, were a triumph: chic-looking and £29.50 to boot, or rather, to midi-heel (marksandspencer.com). May would love them, which means of course the rest of us would never be able to wear them again. Let’s hope she’s not reading this column. It’s not as if she hasn’t got anything else to do".
Instagram @annagmurphy
https://www.thetimes.co.uk/edition/times2/anna-murphy-camouflage-that-will-get-you-noticed-wmdwhzjtp
Tweet